Meghalaya is a state in North East India. The meaning of the state means ‘the abode of clouds’. Meghalaya has an agricultural economy and the major crops are potatoes, rice, maize, pineapples, bananas etc.English is the official language of the state and Khasi and Garo are the two main principal language. Coming to the cuisine of Meghalaya, it is yet another state in the North East where meat is the major ingredient. The staple food is rice with various meat and fish sides. there are many popular dessert varieties in Meghalaya Cuisine.Shir sewain  is the easiest to make and is the most common dessert made by all Meghalaya people and other joyful occassions….including birthdays, anniversaries and many a times Just Like That! Its simple and easy to make, needs only ingredients that you’ll always have at home, good for the growing toddler because it’s made with a lot of milk, nuts. This month February in Shhhh Cooking Challenge we enjoyed Meghalaya cuisine.I am paired up with Pavani Gunikuntla.

She gave me two secret ingredients Khoya and Vermicelli and I have planned to prepare Shir Sewain which was enjoyed by my family.Thanks Pavani for your awesome ingredient. 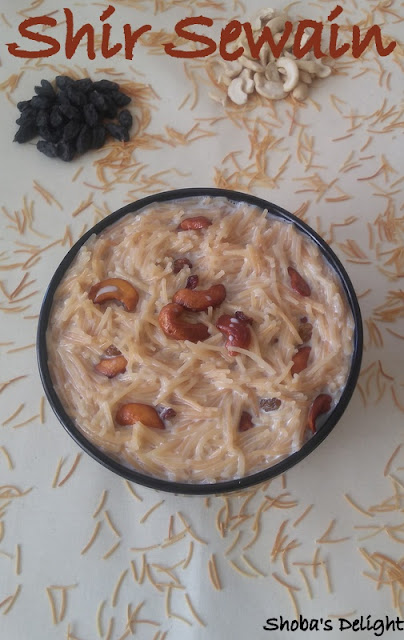 1.Heat ghee in a heavy bottomed pan, add in the cashew nuts. When it slightly browned, add in the raisins. 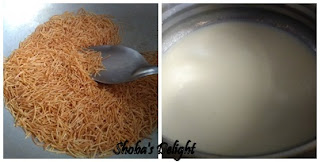 2. Now, to the same saucepan add the remaining butter/ghee, (after the nuts n raisins have been transferred) and add the Vermicelli. Roast till it starts turning a little brown. 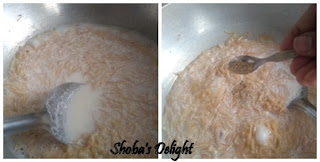 3. Meanwhile, take a deep bottomed non-stick sauce-pan and boil the milk.Now add the milk to the vermicelli and cook until it softens and cooks well.Next, add the roasted vermicelli to the milk, stirring continuously. Allow it to come to a boil on low-medium heat. 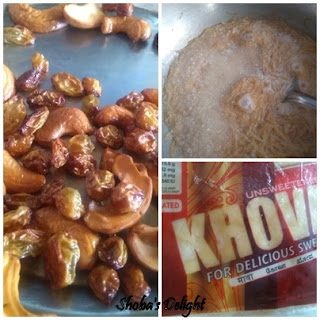 4. Reduce the heat and add the sugar, khova,cardamom powder, vanilla essence to the milk. Keep stirring. 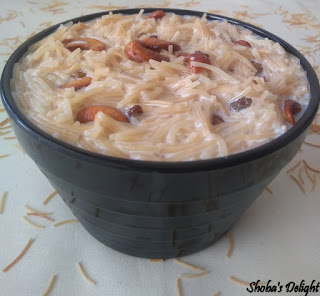 5. Add the saffron and the fried nuts and raisins and mix well. Remove from flame and let it cool down a bit and then serve. 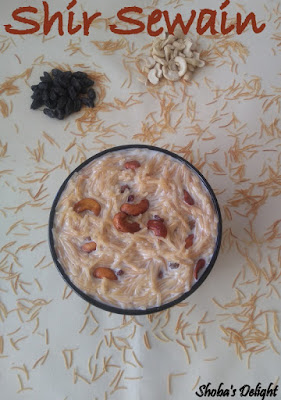 Notes
I prefer it when it’s cold because it’s more thick! Serve hot or cold.
Posted by Shobana Vijay at 01:40